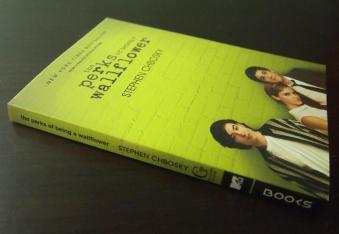 These were just five quotes from the book. But I’ll tell you what, you’ll be hooked on to this book right from the first sentence. I did. Okay, maybe you won’t. Different people, different opinion. But in my case, I felt the book, completely (and by ‘completely’, I actually mean COMPLETELY!) defines me. If you have read The Fault In Our Stars by John Green, then I’m quite sure that you are aware about Hazel’s obsession with the book AIA (An Imperial Affliction). So well, I have kind of the same attachment to this book. I’ve read it thrice already, and also read in between the chapters whenever I feel a need for a push. A push to ‘participate’ in life. And yes, this book never fails to motivate and inspire me! It’s one of my most favorite books.

Charlie, a young, handsome and introvert guy, who was sexually abused by his own aunt, finds it difficult to interact with people. He’s usually depressed. Being shy, he had a very few friends initially. But then, to vent out his feelings and also because he found someone whom he believes is different, that is, the kind of person other people look to for strength and friendship. That’s what Charlie said. And he began writing letters to him, about him, anonymously. Without revealing his own identity, Charlie wrote to this guy, all that he felt. About himself. About friendship, love, life, crush, etc.

Charlie’s life took a turn for good when he met Sam and Patrick. Charlie had a crush on Sam but she already had a boyfriend. By the end, these two – Sam and Patrick – proved to be the most wonderful people in Charlie’s life. They had their good days and their bad days. Ups and Downs. But after all that, they made Charlie feel ALIVE. And, I guess, that’s what really matters in the end. They made him feel that he wasn’t alone. He had them. Their trust. Their friendship. Their true and innocent love. And this is what actually matters!

The best thing that I felt about this book is that, Stephen Chbosky didn’t make it all sound like a typical, fairytale lovestory. Charlie didn’t get Sam as his girlfriend anyways. But he had learnt a hell of a lot of things from her as well as from Patrick. His last letter to his letter-pal is my most favorite one. Wherein he clearly states that, now he’s trying to ‘participate’ in life. I mean, whoa! This-is-Charlie-being-so-optimistic!! All in all, it’s a good read. You won’t regret buying the book. *wink*

The above quote is what Charlie says during one scene… Gimme a high-five Charlie! ‘coz this is EXACTLY what I’m feeling right now! I’m you! I’m Charlie! ^_^